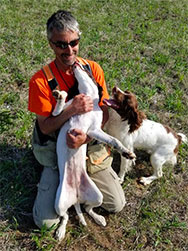 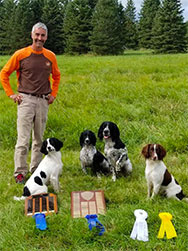 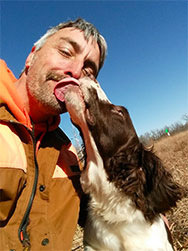 I hunted with lab mixes through school and was rather passionate about pheasant and duck hunting. After leaving school, I spent a couple of dog-less years before being coerced into taking a Springer from a friend. The year was 1990, and I hunted with Morgan (and my friend Jim) through that Fall. We had a wonderful time and got more than a few birds. I lost Morgan that Winter (literally lost-I let her out to potty at night while she was in season, and I never saw her again). After a month of mourning, I went with Jim to a professional trainer’s kennel, and he showed me a Springer named Fete. I bought Fete and she became a wonderful hunting dog, my first and only Amateur Champion, and the mother of my first National Champion.

In 1996, I decided to train dogs for a living and have enjoyed the ride ever since. To date, I have finished numerous field championships with many different dogs. I also have multiple placements, Certificates of Merit, and Guns’ Awards with different dogs at the American and Canadian National Championships, highlighted by winning the US National Springer Open in 2003 and 2020. Additionally, I received the Hogan Award (top professional ESS handler in the country) in both 2004 and 2006. In addition to these achievements, I have been honored to judge numerous Springer and Cocker weekend trials in both America and Canada. I have been thrilled to be selected to judge 7 National Championship in the US and Canada.

In my mind, though, my greatest successes and accomplishments have come in the hunting woods of Wisconsin and the beautiful fields of the upper Mid-West. This is where I’m most at home and where I enjoy the dogs incredible talents to their fullest. From the endurance of Sammy flushing grouse for me on an 80 degree September day before a field trial that he won, to the tenacity of Flask trailing and flushing a rooster through the North Dakota cattails while she ignored dozens of hens flushing around her, the Spaniels never cease to amaze me with their skill, devotion to sport, and devotion to me. In my mind, they are un-rivaled as a fantastic combination of family pet and upland bird experts.